SRE vs. DevOps: Differences and Similarities

Organizations scramble to adopt new frameworks and methodologies to make the software more scalable. Plus, they need to do it in a reliable way that doesn’t cause more problems. Enter Site Reliability Engineering (SRE), a set of practices introduced by a Google engineer. But how does it stack up to frameworks like DevOps?

DevOps and SRE both enhance the software development and product release cycle. And they both do it in similar ways: through collaboration, automation, and improved monitoring and debugging. Both approaches leverage the best that automation brings to the table to help teams collaborate and reduce scenarios of organizational isolation — you know, when the left-hand doesn’t know what the right is doing.

Yet, there are significant differences in how both of these practices operate and what they offer. That means that you, the discerning manager, need to know when you need a Site Reliability Engineer, a DevOps specialist, or both.

In this article, we’ll inform you about both approaches' purposes, including what they do best, where they differ, and more. In addition, we’ll delve into whether they can and do work synergistically or whether they’re their separate little worlds, never to touch.

Let’s start with DevOps and what it can bring to your organization.

DevOps is not just a set of practices but a culture created to speed up reliable, stable, and secure software. With that in mind, DevOps was created as a mix of the best Agile development and Enterprise Service Management (ESM).

DevOps tries to prevent organizational siloing, or in other words, avoids teams from working in secluded little islands that don’t interact much with each other.

Developers and IT teams collaborate with DevOps teams across the product lifecycle, from conception to disposition. The goal is to improve the development and deployment process's efficiency and quality.

So, in essence, DevOps increases communications between teams, speeding up the software development process. And the benefits don’t end there either. You can expect reliable service delivery, much-improved customer satisfaction rates, and more stable on-release software.

Site reliability engineering, in a nutshell

Site Reliability Engineering is a unique approach to application lifecycle and service management. It does this by leveraging an array of aspects from both software development and IT operations.

It first came into the scene in 2003 at Google. The idea behind it was to create an IT infrastructure architecture tailored to the ever-increasing scaling demands of enterprise systems. Ben Treynor Sloss came up with the term and thus could be considered the first site reliability engineer if you think about it for a sec.

As for breaking down what SRE does, it atomizes the infrastructure into essential components that make deploying software development best practices more manageable. In turn, this facilitates using automation tools by teams to solve most problems related to menial, day-to-day issues in the production pipeline.

Bottom line, SRE engineer is a unique role that comes precisely from implementing this set of practices. A site reliability engineer is responsible for ensuring a seamless collaboration flow between IT operations and software development teams, focusing on enhancing and automating processes.

What are SRE tools?

SRE teams rely heavily on automating those “daily grind” processes. They utilize tools and techniques from the SRE playbook that standardize operations throughout the software lifecycle.

As opposed to the DevOps tools, some tools that SRE teams use to succeed at their job are:

SRE vs. DevOps: is that a thing?

DevOps and Site Reliability Engineering ensure that the development and operations teams communicate to work as a part of the same.

Yet, we could see DevOps as a cultural shift towards increased communication and SRE as a set of practices borne out of simple pragmatism.

Let’s check out the main differences between both of them.

SREs' focus is a bit narrower than that of DevOps: to utilize a set of practices and metrics that increase collaboration and service delivery. On the other end, DevOps is a philosophy that facilitates a mindset of collaboration across otherwise-separate teams.

While both have the same goal, SRE involves a more authoritarian, hands-on way to achieve this end, while DevOps is more of an open template for collaboration.

Site reliability engineering has an increased focus on enhancing system availability and reliability. Meanwhile, DevOps speeds up development and delivery while ensuring that the constant improvement/delivery pipeline remains active.

This is also reflected in team structure, with an SRE team comprised chiefly of site reliability engineers with a shared background in operations and development. Conversely, DevOps teams have more varied roles, although a DevOps engineer also has a operations/development background.

How is SRE related to DevOps?

They’re not opposites but rather synergistic methodologies that can gain from each other. Many SRE practices provide practical solutions to many DevOps concerns.

SRE and DevOps are not competing for methodologies. That’s because SRE provides a practical approach to solving most DevOps concerns.

Both of these approaches can help:

So, they can gain a lot from each other. 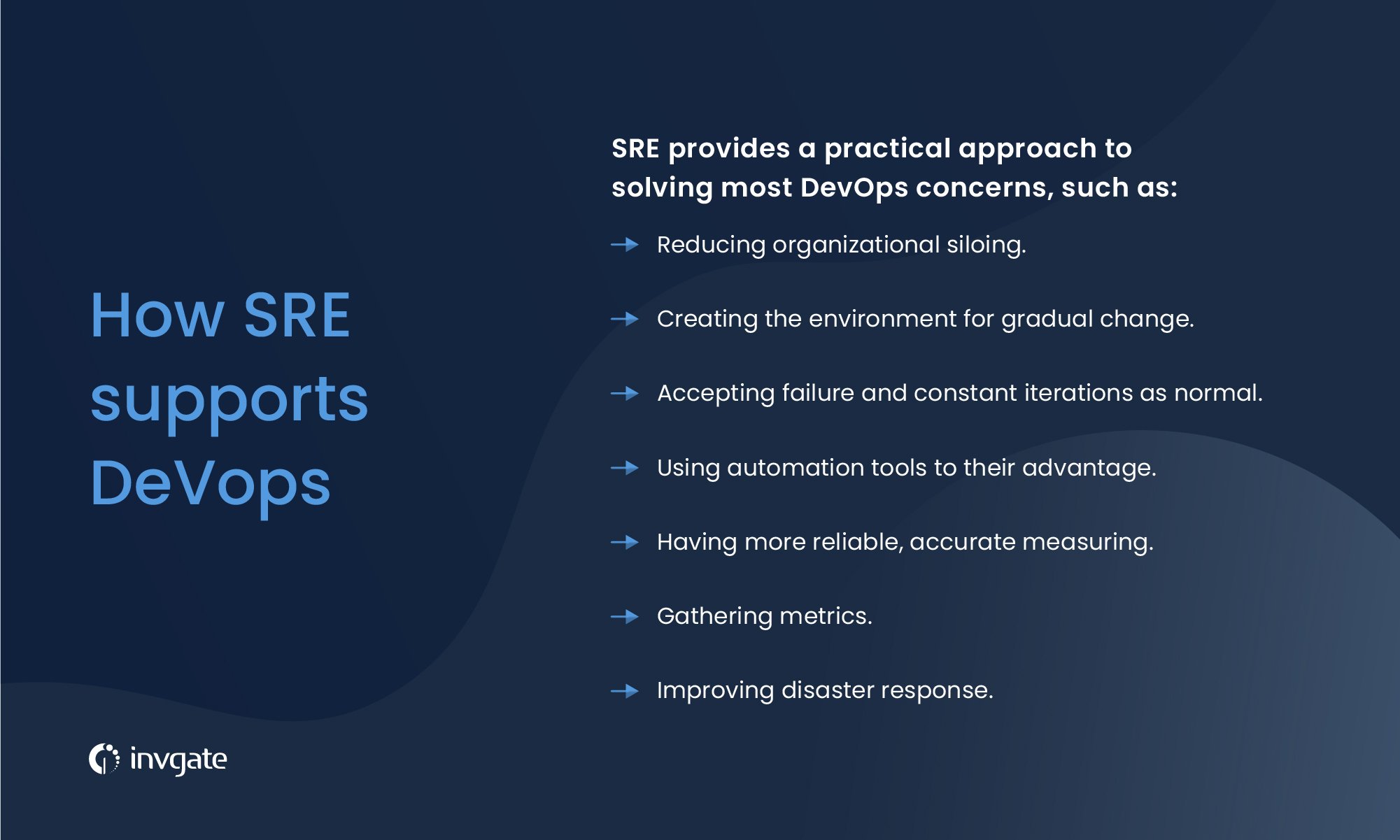 Over time, about 50% of the companies that use DevOps have also adopted an SRE approach for enhanced reliability. The main reason is that SRE allows enhanced observability and more metrics of automation-reliant dynamic applications.

Both of these approaches are not separate from each other. Instead, they share methodologies that can increase each other’s effectiveness at improving the end-to-end cycle of the IT real. As a result, application and operations lifecycles get the better end of the stick.