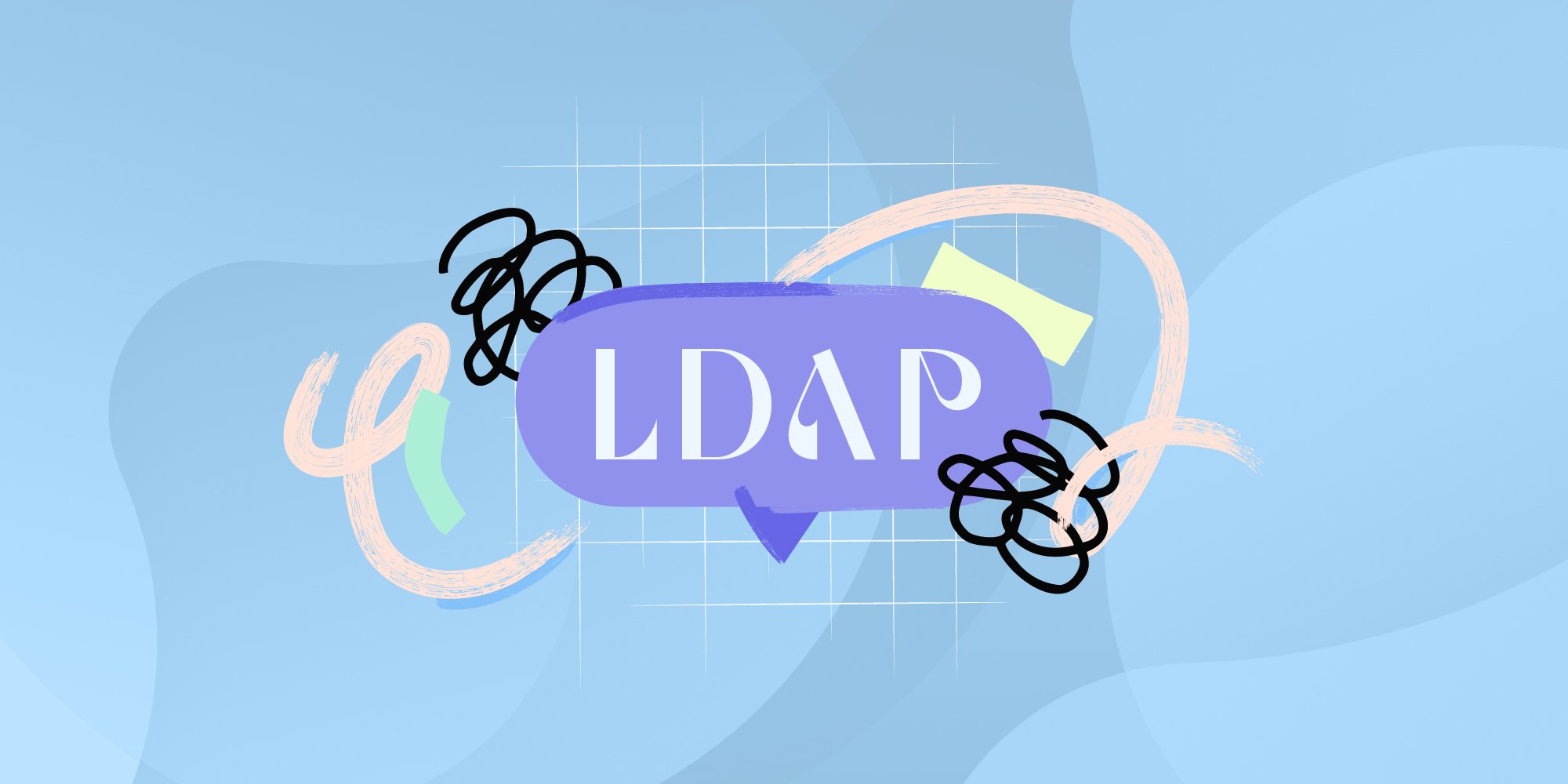 What is LDAP and How Does it Work?

LDAP or Lightweight Directory Access Protocol is one of the oldest and most popular protocols used to retrieve information from directory services, authenticate users, and build applications that don’t compare on security or speed. It’s one of the protocols to manage assets and data over a network and provides secure access to them.

So what is LDAP? How does it work? What are some of the best practices while using the LDAP protocol? Let’s have a look.

What is the LDAP protocol?

LDAP is one of the core protocols for developing internet applications. The protocol was designed to access and maintain directory services over the internet.

LDAP is an alternative to the Directory Access Protocol (DAP) created around 1993. The DAP was commonly used to access the X.500 directory services using the OSI stack, but this was found to be network and hardware intensive. The LDAP protocol was developed to be a lightweight version that required less network bandwidth and utilized the TCP/IP stack.

There are three versions of the LDAP protocol. The latest version is the LDAP V3, adding stronger authentication and data security by integrating the Simple Authentication and Security Layer. LDAPv3 also added extensibility to the protocol.

Most vendor directory services support LDAP, and it acts as just the language with which users can access information from the directory.

The protocol does not synchronize between the user (client) and server users. The LDAP protocol doesn’t specify when or in which order the server returns responses to the queries. And the client doesn’t have to wait for a response before sending another question.

What are the different types of data that can be accessed using LDAP?

An LDAP directory server follows a tree configuration. Each entry may have multiple attributes, each with its object identification.

The data stored can be:

The directory schema defines these contents, which explains how to store all data and the rules governing how it’s stored. It defines rules regarding attributes and object identifiers and compares against different feature values for specific attribute types.

Elements Stored in the Data Directory

The first element is the entry, which could be the user's name, a resource, and a block in the database. You can picture it like the names in your address book; each term and their phone number, house No, email ID, etc. Each entry refers to its unique identifier called the Distinguished Name or DN, which identifies the position of the entry in the tree.

The next element is the attribute. Attributes are attached to entries, and each may have more than one attribute. There are different types of attributes as defined in the schema, and all of these attribute types have an object identifier.

How does the LDAP process work?

The process is relatively straightforward; the client connects to the server through TCP and UDP port 389 or to port636 for LDAP over SSL/TLC. The client sends a query to the server, and the server sends a response back. Once it's over, the connection ends.

Before the client can perform server operations, they authenticate. In the most direct method, a BIND operation is performed, where the client sends its username and password to the server, and the server verifies it. But with v3, you can go for an implementation that uses SASL authentication. 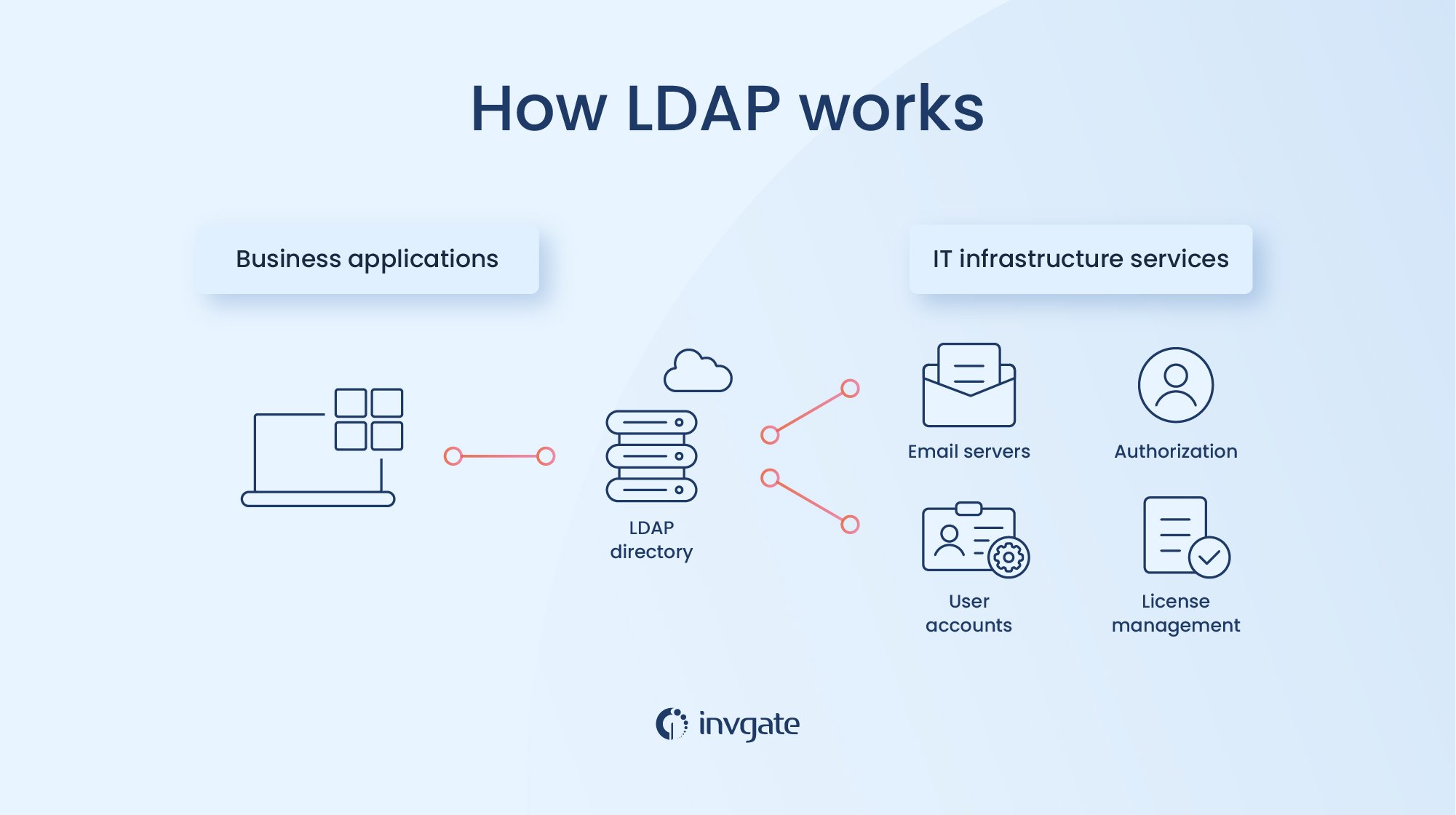 There are many operations that clients can perform using LDAP. We describe some of them below.

What is the difference between Active Directory and LDAP?

Active Directory is a directory service from Microsoft for Windows domain networks. It stores information about various devices and other assets on the web, and administrators use this to manage permissions and access to network assets. The active directory stores information as objects and their attributes.

LDAP is not limited to the active directory alone. We can use it with any other directory service from different vendors supporting it.

It’s also vital to sanitize user inputs or LDAP queries before passing them onto the server. LDAP injection attacks are a known vulnerability, and attackers may be able to bypass authentication, access sensitive information, and even modify them.

It’s also important to follow other security principles, like never reusing identifiers, using a password manager, hashing the passwords, and never storing them in plain text.

Here are some of the other terms used in association with the protocol.

When can you use LDAP?

LDAP is commonly used to retrieve information from directory services and authenticate users before letting them access the stored information. It’s helpful in situations where you want high-speed searches on large databases containing small pieces of data. The protocol is optimized to be good at reading data in exchange for write speeds, so if you frequently update the data, LDAP may not be the best option.

What is the difference between LDAP and SSO?

LDAP is a protocol that stores and retrieves data quickly. The data gets stored as entries, attributes, and attribute values. The protocol manages access to network assets.

SSO or single sign-on is any system that allows users to access multiple systems with one single authentication.

LDAP helps with single sign-on, but that’s not its only purpose.

What is the difference between LDAP and Kerberos?

LDAP stores and locates information about various objects, such as people or network assets. It manages access to different assets in a network.