Naming your home WiFi network has always been an exciting little opportunity for the technologically inclined. A quick Google search can show a list of funny names that people have given their WiFi networks ("TellMyWifiLoveHer," "Nacho Wifi," "Silence of the LAN" to name a few). A similar tradition has existed in naming servers. Many organizations have named their servers after Greek gods or Star Trek characters or even pets.

These funny server naming conventions have had a good time. Indeed in small organizations with a relatively small number of servers, it's fun to say “Dumbledore is acting weird” instead of saying something like SR71BB or A12OXCART. But things get complicated when you try to scale up. There are only so many dinosaurs or Nic Cage movies.

As cloud computing and virtual servers gained widespread prominence, there are simply way too many servers, and calling them Mickey and Minnie is simply not feasible.

Besides not running out of names, there are other reasons to use a standard naming convention across the organization. While you can name a server just about anything, random words don’t serve any function apart from being funny. And to find anything about the server you’ll have to look into your asset management solutions or other tools. Random names would also be of random character lengths and this can complicate things in the long run.

Let’s have a look at some of the best practices for naming your servers.

Consider your unique requirements: There’s no one universal naming convention that works for all organizations. We can establish some basic rules, but we have to consider our unique way of working. Before developing a naming convention, consider how you use servers or how they come into your workflow. Examine what you or your teammates would want to know from these names at a glance.

Keep it short: Long server names would be inconvenient even if functional. Keep the names short and easy to say in a sentence. You don’t want to say LosAngelesVirtualLive#101, make it short to LAV01. Experts recommend a maximum length of 15 characters for a server name.

Make it informative and readable: As discussed above, make the server names informative. Names like Server01, while short, don’t give much information about them. Ideally, these names should contain the details that are most commonly referred to in your organization. If disk space is important, use that, if IP address is important, add that too. Informative server names can be a great tool for improving productivity.

Make it easy to type or discuss over the phone: Once again, don’t make it too long. But also don’t include characters that may be confusing while typing. For example, odds are you’ll use the number 0 in your names, so it may be a good idea not to use the letter ‘O’. And don’t jump between upper case and lower case (this is not your password), stick to one of them; a mix of lowercase and uppercase letters can make it difficult to talk about it over the phone. You can always go for the pascal case or camel case if it improves the readability as long as everyone who may have to work with it can easily understand it.

Make sure it is scalable: Make sure that when you scale your systems, or when you have more numbers, you won’t have to change your naming convention. For example, if you’re using XXYY001 where the first two alphabets denote the location and the second two denote the function, you can have only 1000 (including XXYY000)servers in XX location for YY purpose after which you’ll run out of names. If it’s like XXYY01, you’ll only have a 100 names (including XXYY00)

Do not reuse names: Even if you discard a specific server, it's best not to reuse the names for different servers. This is a common theme that comes up in forums; even in organizations that use marvel characters to name their servers, they emphasize that they never reuse the names. This could create the same chaos as duplicate server names.

Use a naming key or a well-defined naming standard instead of using random names: This much is clear from the above list of best practices; create a well-defined standard across the organization for server names. It could be something as simple as <location><virtual/private><production/live> or whichever information is required in your organization.

But, again, keep it short. And create a key for all the information you’re adding in names; you don’t want one person to name a server LosAngVirt001 and another person to use LAPr003. Dedicated codes for every piece of information in the server name can make it easy to look them up and avoid duplication.

Make sure your server naming convention works with your systems: For example, a pascal case or camelcase may work well for readability, but if your systems or asset management solutions cannot support it, it may create problems. The same goes for purely numeric names or alphanumeric names. Make sure it won’t create issues in the present or the future with your systems. Underscores, forward slashes, and some other characters can cause issues with networks. 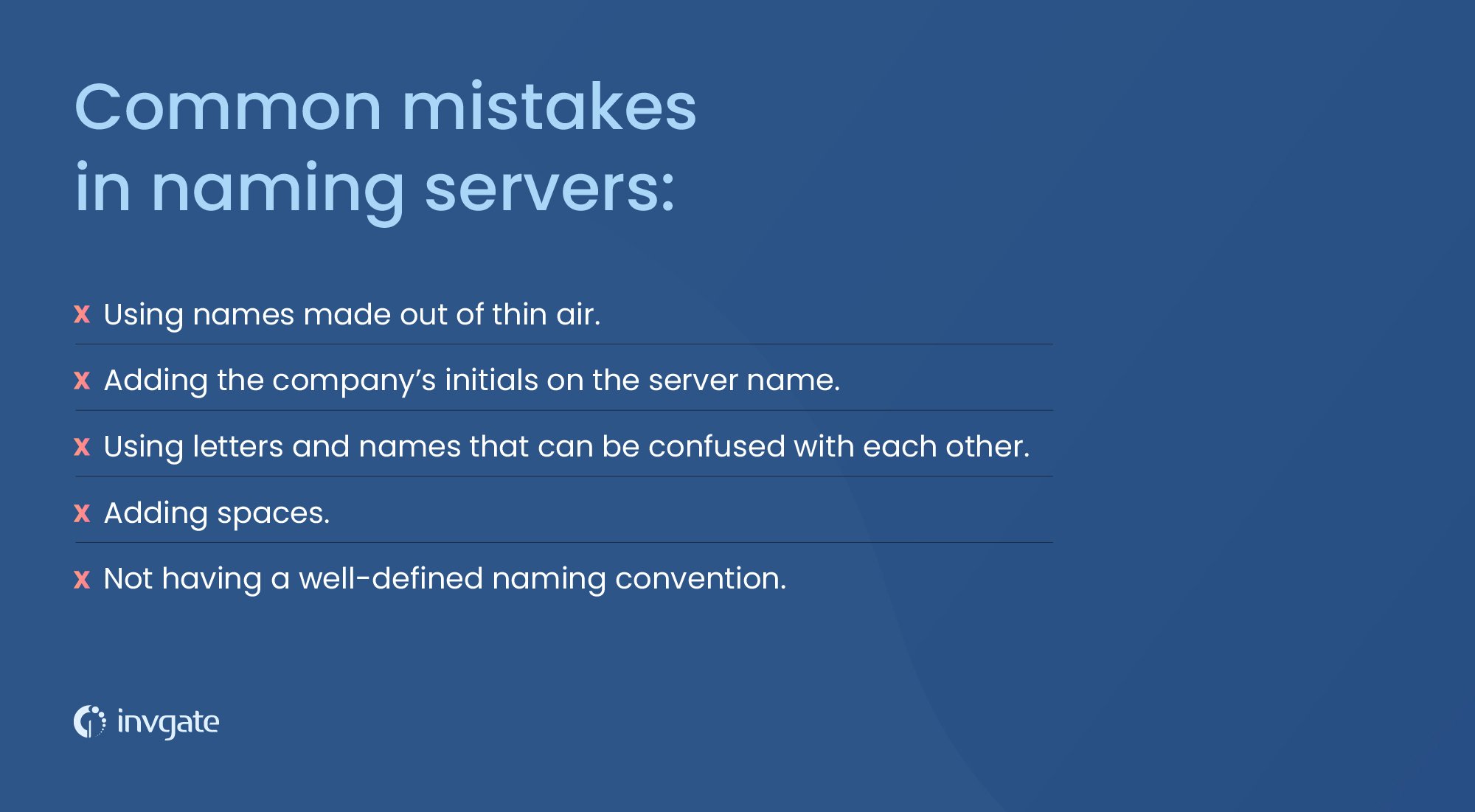 Using names made out of thin air: This includes naming servers based on a theme: rock bands, greek gods, vegetables, planets, etc. It doesn’t help you understand the purpose and you will run out of names. And as your company grows, it will create huge problems for you or whoever replaces you.

Adding the company’s initials on the server name: Once again, it doesn’t serve any purpose other than making your server names longer. It may be useful if you’re managing servers for multiple companies, but it's a very specific use case.

Using letters and names that can be confused with each other: As with Os and 0s, names and letters that may look like each other can be confusing. V, W, N, M coming together in a name can be confusing, so can l and i. While making a key for creating names, avoid using these letters.

Adding spaces: As with naming variables, spaces in a server name can be confusing. This is not a commonly observed mistake; most IT admins use some elements of variable naming conventions while naming servers.

What is the purpose of naming conventions?

Naming conventions are used to ensure consistency among names. They make it easy to identify and recognize the function of an asset easily and prevent duplicates.

What is the ideal length for a server name?

It’s best to keep server names as short as possible, but they should also contain important or constantly searched for information. Ideally, server names should be shorter than 15 characters.

Read other articles like this : IT General, server naming conventions