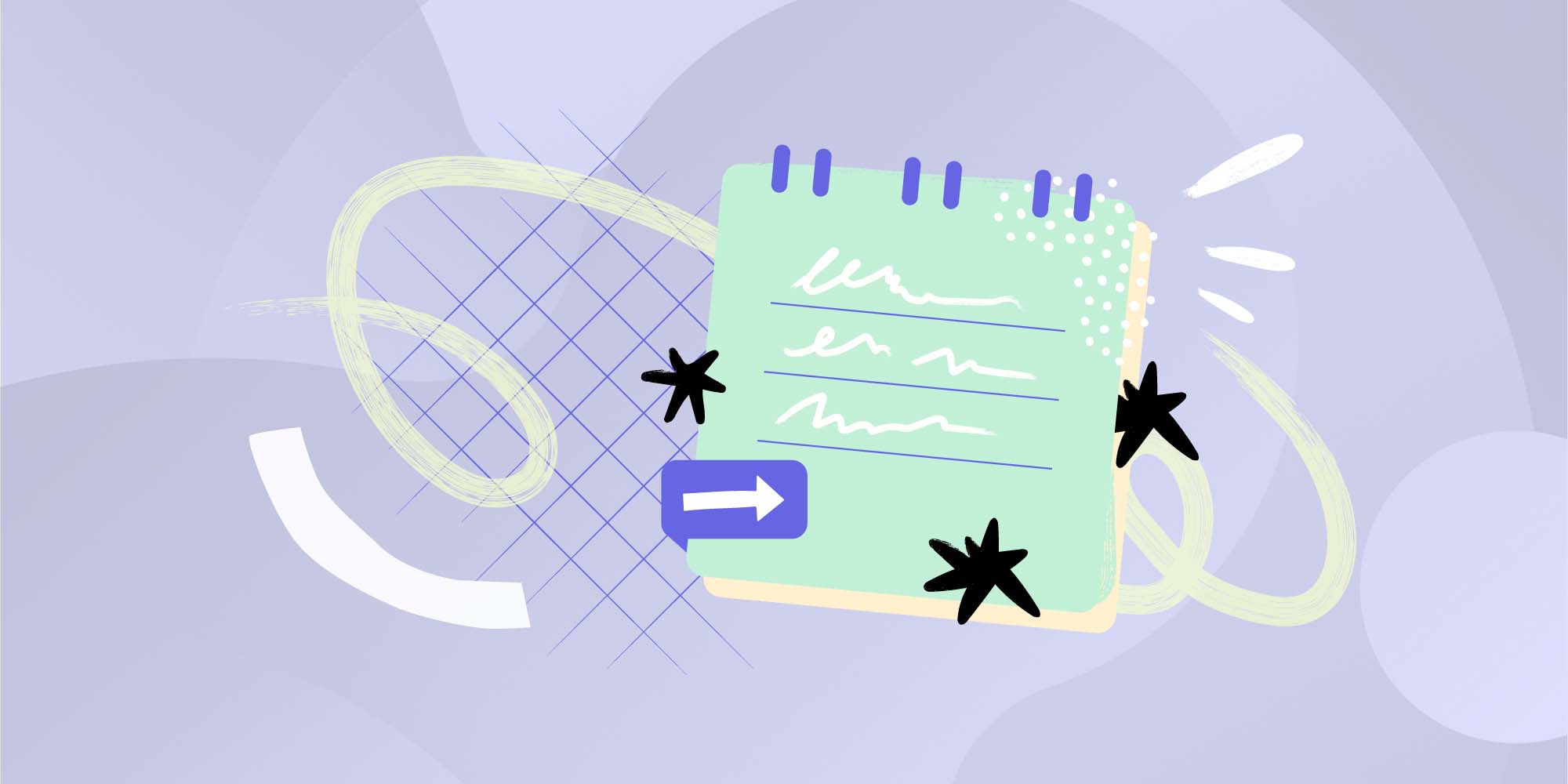 How to be an Effective IT Leader? 3 Principles to Nail it 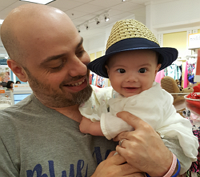 Being a good IT leader may not be something you’re born with but it is something you can learn. Of course, some people are naturals, but instinct isn’t the only way to achieve it.

You can also become one – in time, and with the right tools and approach. And that’s what we’re about to explore here.

If you are wondering how to be an effective IT leader, keep reading to discover how these crucial principles will help you lead your team to become an efficient and high-performance unit.

How to be an effective IT leader? 3 principles to succeed

Maybe you’ve landed a new job or received that big promotion you’ve always wanted, or maybe you already have leadership experience and are just looking for a fresh perspective. Having a team of IT professionals looking to you for leadership can be intimidating – especially if you’ve most recently been their colleague and now you’re suddenly their boss.

While it may seem that way, following the three leadership principles mentioned above will help you quickly overcome any hesitations that you may have.

Let’s take a closer look at each one of them. 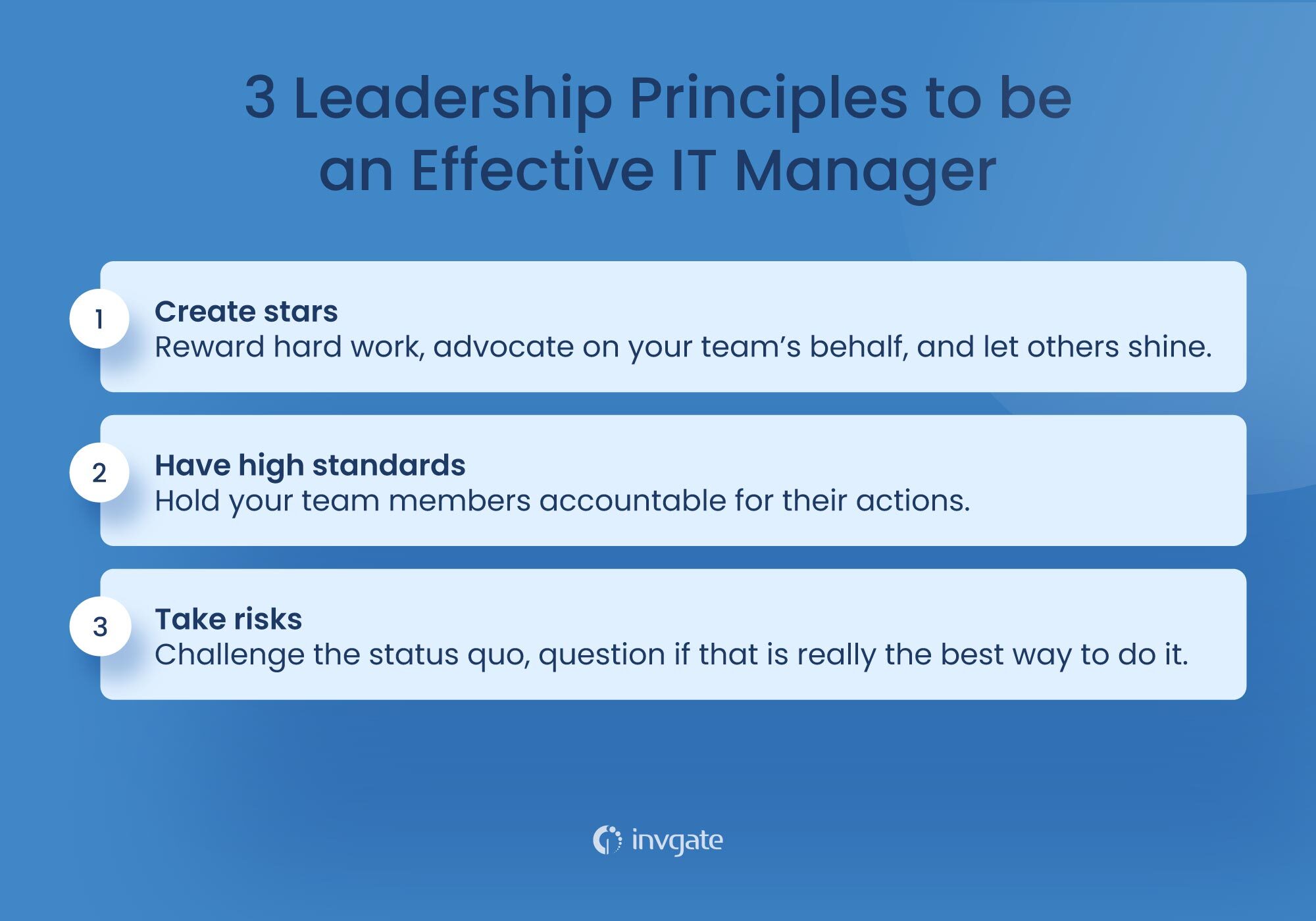 Leaders let others shine, it’s as simple as that. Every IT professional is seeking recognition for their efforts because that’s what elevates them from being a relatively unknown coworker to a respected member of the team. Moreover, it lays the foundation for a potential career path within the organization.

However, you should not lose sight of the fact that recognition means more than just a simple pat on the back – it’s nice, but it doesn’t leave a lasting memory and it’s nothing to write home about. On the contrary, meaningful recognition is created by putting them first.

And how can you do that? An example of putting them first would be something such as a response to upper management identifying “team member and myself resolved this complicated issue,” then either BCC’ing them on the email if there aren't any confidential details within or forwarding them a modified version with the privileged material removed.

This simple action doesn’t require much of you and has enormous potential: the team member gains immediate respect for you as a leader, and the leadership team learns that this team member is capable and potentially reliable if a continual stream of similar emails comes to their inbox.

Just keep in mind that, if others are unable to shine due to this team member stealing all the spotlight, your job as an IT leader is to seek promotion for that person. Why? Because a leader would not allow themselves to be the obstacle that prevents one of their team members from being able to reach their potential. Remember: you create stars.

And once the promotion is effective, you can hire someone else to fill that role.

On top of this, such a situation would be the perfect reminder for the team to be the next person to shine and follow that career path. And it’ll also gain you further respect as an IT leader because you showed them in practice that a solid work ethic can result in both a financial and responsibility reward.

2. An effective IT leader has high standards

Recognition can be both positive and negative. Rewarding hard work and advocating on your team’s behalf is only one part of the puzzle. But in order to be an effective IT leader, you also need to hold your team members accountable for their actions.

Though it may sound counterintuitive, it provides your leadership further respect, as long as you spread this approach evenly across all members and do it consistently.

Everyone fails at some point, it’s part of being human. You will too, and your leaders will be the ones holding you accountable for that. So, you need to do the same with your team.

Automation and having clear documented processes in place could be ways to decrease human error, but nothing is infallible. Failure can be something small like a typo in a form that is easily corrected, or something large such as the failure to meet your customer’s SLAs. Irrespective of the magnitude, the IT leader should acknowledge the mistake and utilize a sliding scale to hold their team member accountable.

In this sense, a small error may receive a simple eye contact or a nod of the head, while a big one may require a private one-on-one session to discuss the issue, especially if it was due to a conscious lack of effort.

No matter the situation, what matters most is your consistency because that will teach your team members you care, and encourage them to make a conscious effort to avoid similar mistakes in the future.

As opposed to this, being inconsistent creates an environment where your team is never sure what really matters, causing them to lose motivation and potentially undermine your authority.

If the first two principles were oriented to your relationship with the team, the last principle to be an effective IT leader addresses your attitude towards the job and encourages you to be disruptive.

The thing is that many processes and procedures currently in use exist for no other reason than that’s how it has always been done. Anyone can toe the line and follow what the previous manager did, but a good IT leader will challenge the status quo, questioning if that is really the best way to do it.

It ultimately comes down to whether it is the result that matters or the method by which that result was derived. If it’s the former, then an effective IT manager will take risks to instill newer and more modernized ideas to bring about the same return, or possibly an even better result than the one previously produced.

If this is your case, don’t let the fear of taking risks prevent you from being creative and striving for better. Sure, your idea may not work and its failure might even have consequences. You have to own that the same way you’re expecting of your team. But what if it does work? Imagine the positive spotlight you will have created for yourself.

Consider rotating team members’ responsibilities. It is a low-risk high-reward option that will benefit both the organization and the team members themselves in their career paths. The typical organizational structure for a frontline IT team has all members as generalists who are expected to be able to resolve any issue that comes their way. The concept works in theory, but in practice, it results in a team of people with no clear specialty and an unclear career path. Rotating their responsibilities and making them specialize in a given topic for some time, say one month, allows them to acquire all of the skills required for that given task. It also plants the seed of a potential career path should that specialization light a fire inside of them. If not, maybe next month’s responsibility does it.

There might be a learning curve, but the result should be a team who specializes in every topic and who is motivated and producing at a higher level than ever expected, instead of a team of generalists who lack motivation and specialize in no one topic.

Being an effective IT leader is no easy task. It takes time, knowledge, and excellent hard skills and soft skills, but it’s definitely not impossible if you’re up to putting in the work.

The best place to start would be analyzing where you stand based on the three leadership principles we just discussed:

Your success as an IT leader will be measured not on what you personally achieve but on what your team as a whole conquers. It’s through their victory that you’ll receive recognition for your efforts and your ability to drive results.

Add to this a consistent analysis of your team’s quality metrics, and a system to keep your manager abreast of their personal performance as compared to the overall goals of the organization, and you will have created an environment where:

Read other articles like this : Project Management, Service desk manager