It should come as no surprise that cloud-based ITSM solutions have become so popular. As we’ve explored in our comparative piece: they are easily deployable, they tend to be less costly as an upfront investment and they are highly customizable to fit different IT infrastructures and team functions when compared to their on-site equivalent.

Though we could sit and praise their many advantages, the truth is that taking the leap does come with its own set of considerations to keep in mind so that the transition happens as smoothly as possible. We’ve compiled 5 things that should be on your mind through the implementation process:

1. Knowing when your business is ready to make the jump

Many companies who initially seek out cloud-based IT infrastructures are often looking for a way to help their IT departments gel together with the rest of their business. Larger companies are a clear-cut example of this, even more so with those which rely on automation to lighten the load off service management teams. Processing and tabulating such a massive amount of data can easily stress these teams and cloud-based ITSM solutions offer respite for them in that regard.

That is one of many indicators that signal your ITSM infrastructure is due for a change. In general, terms, if you’re starting to notice that your systems don’t offer much in terms of flexibility or they just start showing their age, then switching to the cloud might be the best call. In addition, if your business has most of its moving parts already set, a cloud-based system allows other departments to focus on business outcomes and objectives instead of tedious software limitations such as compatibility across the infrastructure.

As a consequence, the burden of managing your company’s IT infrastructure on your own is lifted and it frees up both time and resources to operate in a more streamlined fashion. That’s the key factor here: resource efficiency.

As much as the technical side of things might entice you, the truth is that knowing when to migrate your IT infrastructure is also an entrepreneurial decision that must contemplate the possibility of apprehension to change and culture show. When wondering if this is the best time in your company’s lifespan to take this important step, this should be clearly communicated and the deployment should be accompanied by an adaptation period that allows personnel to find the cloud-based equivalent of the tools they’ve already learned how to use. We’ll elaborate on some more details regarding this point later.

While it’s widely known that the upfront costs of cloud-based infrastructure are much cheaper than an on-site alternative, the fact that such costs exist in the first place is something worth remembering. So, before even looking for vendors, figuring out your company’s spending as well as the value that your current system brings to your business is definitely a better course of action.

This consideration is especially relevant to those nascent small to mid-scale companies that might be willing to give cloud-hosted ITSM solutions a spin as their very first infrastructure. Tight budgets are a major concern in cases such as these and being aware of the upfront costs allows businesses to make an educated decision whether they end up choosing a cloud-based alternative or not. 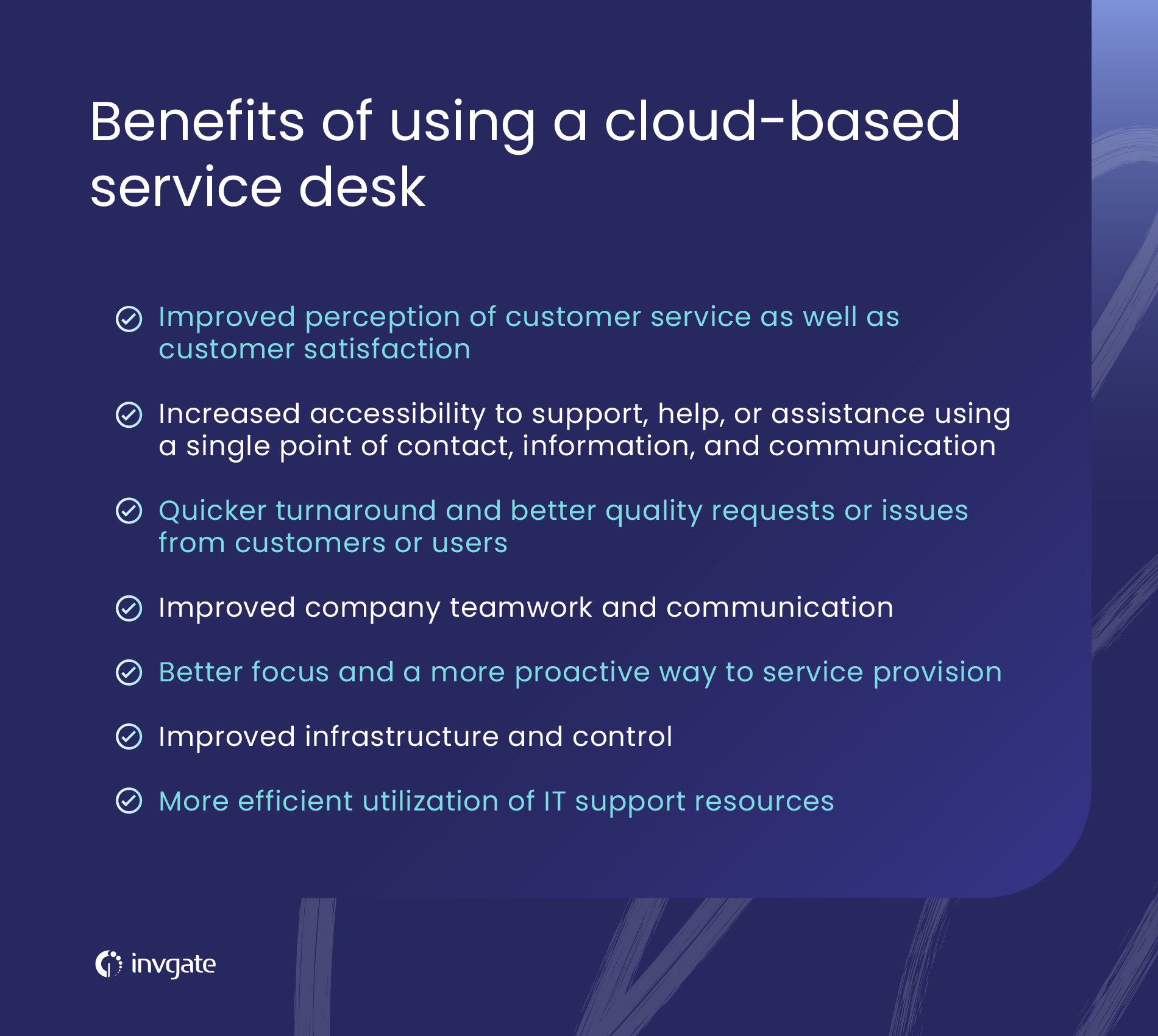 As we’ve mentioned before, we do have a piece on the key differences between these two models but being aware of these differences is of course something to keep in mind. Let’s do a quick recap and take a look at some of the key differences one should pay attention to when deciding as well as some pros and cons of each infrastructure type.

4. The hurdles of data transference

Data is the digital era’s gold. As our relationship with the Internet continues to expand, our data is able to be interpreted and processed with both good and ill means. When transferring data to the cloud it is paramount to consider what type of data is going from an on-site application to a cloud-hosted solution. This data might include anything from customer data and contracts to assets or even much more sensitive documents. Not absolutely everything needs to be transferred to the cloud, being selective pays off in the long run.

Compliance in the face of big changes can be difficult when trying to move data to an external server. Pushback is to be expected especially from human resources and rightfully so, as they often deal with sensitive data for any company.

Before jumping to an external server, one must remember there are legal ramifications to things such as moving all data to the cloud, as wild that example might sound. The truth is that with regulations such as the General Data Protection Regulation (GDPR) one has to be extra careful with how data is managed not only from a compliance standpoint but also from a cybersecurity perspective. One only has to take a quick glance at the current cybersecurity landscape to see that data protection is more necessary than ever. Have you thought about the implications and what the subsequent fallout could be if your data became compromised? This should be one of the priority concerns of any company looking to migrate to a cloud-based ITSM solution.

Though we’ve touched lightly on the subject of potential culture shock when looking to migrate ITSMs it essentially comes down to a question of effective and assertive communication. Framing this change as what it really is, a tool to facilitate quicker and more homogeneous workflow. Expressing this opportunity of change as an evolution is best portrayed by showing the immediate results of switching to the cloud.

Yes, this new software might be better and more practical than the previous on-site applications and interfaces, but managing personnel hosts the challenge of allowing everybody to have an equal playing field. This is best achieved with onboarding campaigns to keep everybody on the loop even before the new SaaS is deployed. Teaching teams the new way of doing things they already knew how to do might bring some hurdles along the way, but that’s why having a provisory mindset for these crucial inflection points is always a must. 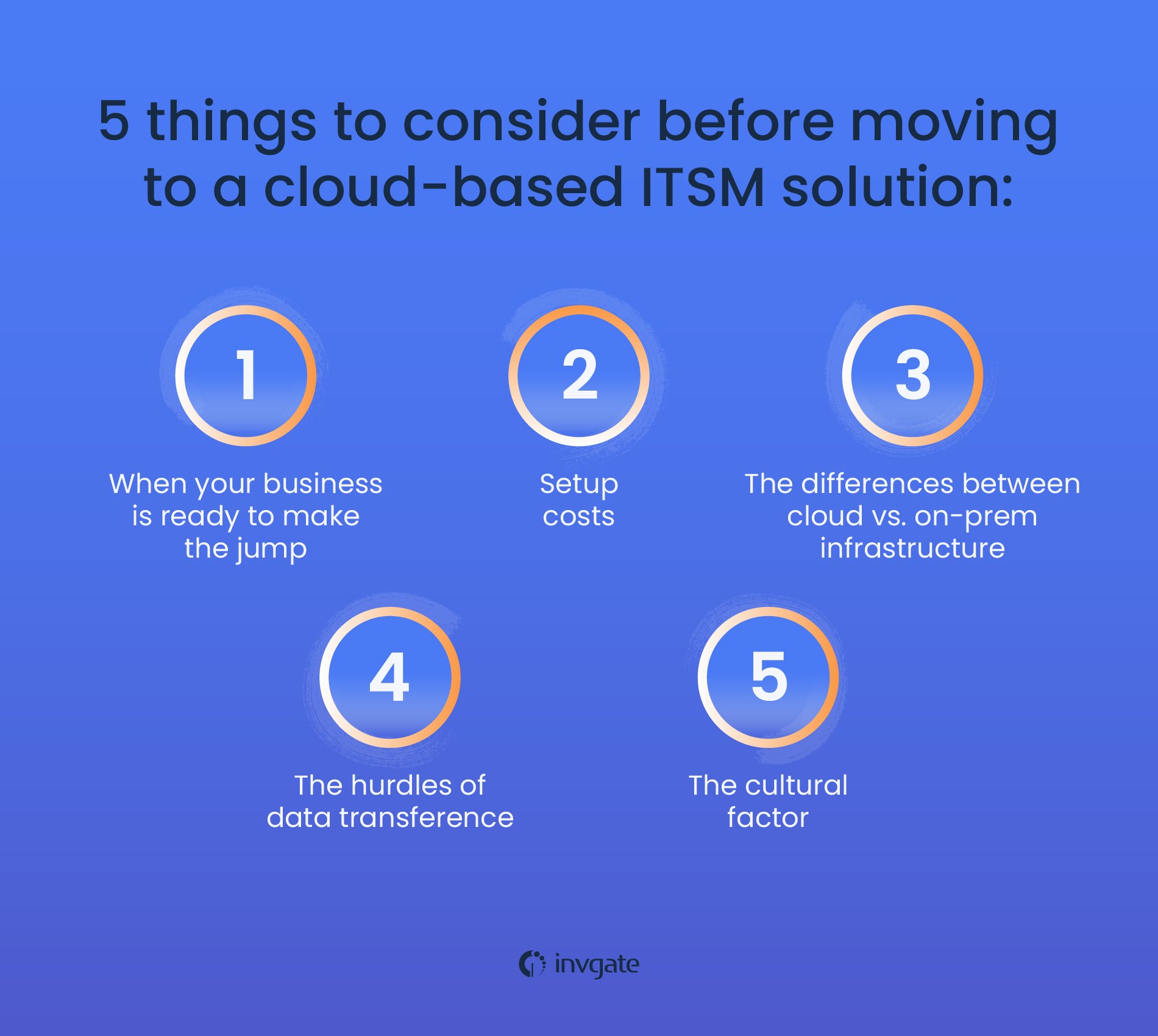 So, to recap: Moving to a cloud-based ITSM solution is a net positive. However, when seeking to do so, it’s important to remember things such as the stage that a company is at. Plus, knowing where you are migrating to (the cloud) and from (on-premise) and their own set of pros and cons helps to make an educated decision. In addition, monetary and resource costs as well as the question of data sensitivity when transferring must be on everyone's mind. And last but certainly not least, the question of fostering a positive relationship between employees and the new software and interfaces in a way that is as hassle free as it can be.

How do I know if I need to move to a cloud-based ITSM solution?

If you notice that production has become stagnant or that many employees show signs of jumping way too many hurdles to deal with tasks due to compatibility issues or lack of information, then it might be time to make the jump. Also, if you feel like budgetary concerns don’t allow you to acquire the necessary software, storage space or computing power, then this could also be interpreted as a sign of a due change.

Cloud-based solutions aren’t expensive when you look at them from an upscaling perspective. If you’re looking to scale up your business and you want something tailored to your specific needs, there are loads of SaaS that can make your life easier, that’s for sure. The best thing is their pay-as-you-go plans that allow you to tweak the knobs of certain aspects in your newly acquired cloud-hosted ITSM infrastructure.

Is my data in cloud-based ITSM solutions safe?

Your data is only as safe as the cloud-based ITSM solution’s cybersecurity system. Though that might turn some people off from taking the leap to cloud-hosted solutions, the truth is that due to their extensive client-base, most cloud-hosted solutions have exceptionally solid cybersecurity protocols and encryption methods that make it very difficult for bad actors to get a hold of your sensitive data. Investigating the market of cloud-based solutions is crucial in instances such as this. There’s fortunately something for every company’s specific needs.