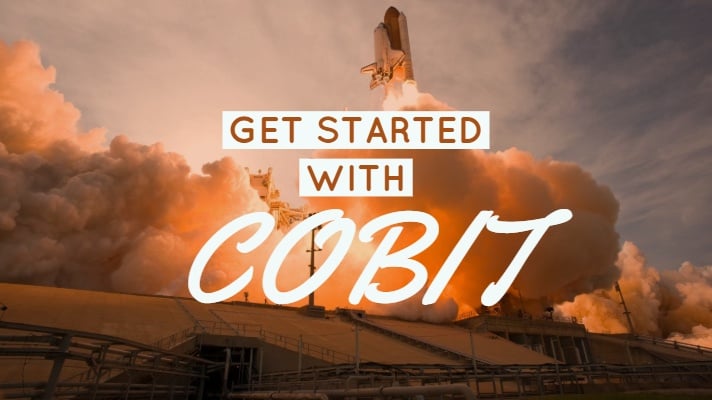 10 Tips for Getting Started with COBIT

You’ve probably already heard of COBIT – it has been around for a while. If you have, then you might remember COBIT from its days of being an approach that was applicable to those with, shall we say, audit requirements. You might also remember COBIT’s longer name (as was) – “Control Objectives for Information and Related Technologies” – which reinforced its audit-based roots.

But it’s just plain-old COBIT now. Like ITIL, and the IT Infrastructure Library nomenclature, the acronym has superseded the longer-form name to reflect the evolved focus and scope of coverage. And if COBIT is potentially of interest to you, especially with the new COBIT 2019 recently replacing 2012’s COBIT 5, please read on for 10 tips on how best to start your COBIT journey.

Getting Started with COBIT

As with many things in life, let alone IT, there’s very infrequently a one-size-fits-all approach to take. Instead, there needs to be a balance between what you need to achieve, your key priorities, and the organizational limitations you have on change.

So please take the following 10 tips in the spirit in which they are offered – consider them, and take to heart those that are relevant to your organization.

1. Understand what COBIT is for.

This might seem an odd one to start with, but I’ll point you to the above-mentioned evolution of COBIT – with it now described as an “information and technology (I&T) governance and management framework.” So, it’s so much more than it originally was. It’s also important to understand that it’s not a case of ITIL (or any other IT service management (ITSM) approach) versus COBIT – because COBIT is complementary with other such approaches.

2. Understand what governance means for your organization.

We nearly didn’t include this one. However, given the importance of governance to the COBIT approach, we added it back in. To get the most out of COBIT, it’s definitely important to “get everyone on the same page” regarding governance (and management for that matter). If you don’t, you’ll probably have as many internal definitions of governance as employees.

3. Recognize that COBIT is about more than just processes.

Many ITSM approaches focus on processes for delivering improvement. COBIT does too, but it also focuses on six other “enablers” that are essential for effective governance: principles, policies and frameworks; organizational structures; culture, ethics and behaviors; information; services, infrastructure, and applications; and people, skills, and competencies. The important thing here being the ability to understand which of these seven enablers will realize your organization the greatest improvements/benefits.

Isn’t this always the case with anything new? A key success factor for COBIT 5 was top management providing the direction, mandate, and ongoing commitment for the initiative. Expect this to remain so with COBIT 2019.

5. Formally justify the investment in COBIT.

Don’t let it be started as “a good thing to do.” Because these (types of initiatives) tend to be the first things canned when budgetary pressures come into play. Instead, create a formal business case that articulates scope, promises benefits, and – importantly – describes a mechanism to measure progress and success.

In particular, identify specific “pain points” that COBIT can help to address (and resolve) rather than just starting with a list of “new things to do.” Not only will this help you to retain focus, it will also help in promoting business-improving successes.

As with ITIL, there’s a need to “adopt and adapt” COBIT, to the specific needs and context of your organization; rather than treating COBIT documentation as gospel and the only way to do things.

8. Ensure that you use appropriate, and agreed, language.

Your organization might have already invested in a common language, or lexicon, to help ensure that related communication is clear and that everyone has a common understanding of things. So, for COBIT, this might be an extension of what already exists. Or it might be the creation of something new that will benefit your organization beyond the introduction of COBIT.

Again, as with many other new things, it’s important to focus on “quick wins.” With this smartness reflected in the prioritization of the most-beneficial improvements in the context of the ease of delivery. This early delivery of benefits will help to reinforce the continued investment of time and money (in COBIT), as well as motivating those involved in the change.

10. Ensure that suitable metrics are in place at the outset.

As already touched on in tip #5, there needs to be a mechanism in place that can assess and report upon improvement. Importantly, this isn’t just for the “introduction of COBIT” phase but for the ongoing assessment of performance and the progression of improvement opportunities.

So, that’s our 10 tips for starting with COBIT. What would you add? Please let us know in the comments.

Read other articles like this : ITIL, ITSM, ITSM Framework